You can count on Oehlert Bros. for your heating oil needs!

For more than 70 years, Oehlert Bros. has been the leader for providing dependable heating oil delivery to Pottstown and surrounding communities in eastern Pennsylvania.

NOTE: If you have a no-heat emergency or a heating oil runout, please do not contact us online. Call us at 610-881-6327 any time of day or night for emergency delivery and service. 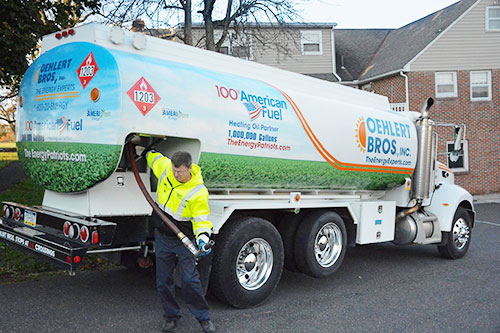 Pottstown was first settled in 1752, on land originally deeded to William Penn. The community was first named “Pottsgrove” for founder John Potts. It was incorporated in 1815 and renamed Pottstown.

The first settlers of Pottstown were primarily German, Swedish and English. The iron industry was a major part of the economy for many years. Today, the area is known for agriculture and dairy farming.

Notable Pottstown residents and natives include:

Our B20 Bioheat Plus® heating oil revolutionizes how you heat your home. It is much cleaner burning thanks to the blend of ultra-low sulfur heating oil and 20% biodiesels, derived from natural resources such as plant oils, algae and recycled restaurant cooking oils. B20 Bioheat Plus® heating oil dramatically reduces greenhouse gas emissions, making it better for the environment and shrinking your carbon footprint. It is also much easier on your home’s heating system, so your risk of breakdowns is reduced while your heating system’s life expectancy is extended.

“Have been an Oehlert Bros. customer for many, many years, using their heating oil and service since day one. Their servicemen, either delivering heating oil or servicing the furnace, have always been very respectful and knowledgeable. The one that was here last week for the yearly check-up on the burner explained everything he was doing and why. Very happy with Oehlert’s.”
— Patrick M.

“I have been using Oehlert Bros. for well over 30 years now, and they have never let me down. It’s one thing that I have never run out of oil, but whenever I have had a problem, there was a tech out to my house immediately, always doing a great of job of making repairs and always leaving things in better shape than when they arrived.”
— Alan F.

Come to Oehlert Bros. for the following heating oil services:

Keep your Pottstown home warm, safe and comfortable with the dependable heating oil delivery and service from Oehlert Bros. Become a customer today!